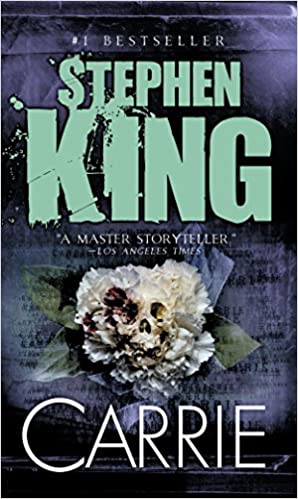 (This post is a translation by the author of his original post in Spanish, which can be read here in the original.)

Since December of 2020, I have glanced at the book If It bleeds by Stephen King translated in Spanish as La sangra manda, a title that doesn’t make justice to the phrase ‘if it bleeds it leads’ in reference to the Media and how bloody News translate into a massive audience.

I argue, after reading Mr. Harrigan’s Phone, one of the four novellas in If It Bleeds, that King must be one of the authors of Horror who is best known for his ability to portray the daily life of any common man and make it extraordinary. Reviewing a statement by Stephen King for the Paris Review (as featured in Stephen Spignesi’s Stephen King American Master), the author argues that, “if you go back and review the books from Carrie on up, what you see is an observation of ordinary middle-class American Life.”

Now it is time to talk about Carrie (1974) and King, an author idolized as resisted. I do a mea culpa, my devotion to Poe and my respect for Lovecraft somehow always made me reluctant to study King. I recently mentioned to a colleague that I was studying King and she asked me with a sarcastic smile what was I studying if King’s books were so easy to read, so simple that you don’t even have to concentrate.

I will try to explain what I see in Carrie, first reviewing some traits from that novel as shown on Stephen King American Master by Stephen Spignesi, a Worldwide authority on Stephen King:

*Carrie was initially a tale that King tossed in the trash and that his wife Tabitha picked up.

After rewriting it for an hour, King became discouraged again.

*King said that the story was so flawed that it shouldn’t have been written from the start.

*The folk singer at the HS Dance is named John Swithen which is a pseudonym King used in 1972.

Before attempting to arbitrarily divide Carrie into five parts to summarize it, I want to emphasize that, like Poe, King highlights the social fears of people. In “The Fall of the House of Usher”, an aristocratic family has phobias and fear which are an allegory of the loss of Patrician privilege in the Jacksonian era: the popular class could aspire to social mobility which created fear in the ruling class.

In Carrie, Margaret White (the main character’s mother) has her qualms towards communism, something not far removed from the current American reality and her animosity towards communism and socialism without knowing in many cases the difference between one and the other. Mrs. White thinks that politicians are thieves and sinners and that they would eventually hand the country over to the atheist Reds: “Momma said all politicians were crooks and sinners and would eventually give the country over to the Godless Reds” (p 23).

King is accused of everything: of not knowing how to write, of being a “commercial” writer, of being very predictable and I wouldn’t be surprised if someone out of the blue blames him for global warming.

Assuming that King’s work is not that great as some people suggest, some questions have to be asked about why King’s works is present in movies, TV, and comics with such success. How is it possible that from one single short-stories book like Night Shift (his first short stories collection) several movies have come out, some of them even with sagas?

I am speaking about  Jerusalem’s Lot, The Boogeyman, The Children of the Corn, Trucks, The Mangler, Sometimes They Come Back.

Some of the films based on King’s work have also been highly praised films: The Green Mile (Frank Darabont), The Shining (Stanley Kubrick), Stand by Me (Robert Norman Reiner), Carrie (Bryan de Palma)Here I broke down Carrie into five acts in an attempt to summarize the novel briefly:

Carrie White has her first period in the women’s bathroom and is bullied at the hands of all her classmates led by Cris Hargensen; they threw tampons at her. Sue Snell feels ambivalent: she laughs and feels sorry, but she doesn’t help Carrie.

Ms. Desjardin protects Carrie and discovers that the young woman has no idea what menstruation is. Carrie is sent home, but right before that while she is at Mister Morton’s office, he calls her Cassie, and she screams, “that is not my name”. A heavy ashtray falls to the ground as if Carrie’s scream has knocked it over.

Carrie confronts Mrs. Margaret White (her mother) and asks her “momma” why she didn’t explain to her about her menstrual period. Her mother only talks about sin and her violent fanatic personality emerges.

Carrie argues with her mother but goes to the HS Dance with Tommy, Sue Snell’s boyfriend who feels bad for Carrie. However, Cris Hargensen is hurt because she was punished for harassing Carrie by not going to the school dance, she puts a bucket of blood on the top of the dance floor on the main deck. Carrie feels joy and is living the night of her life with Tommy and they are on the main stage when a bucket full of blood falls on them.

It is here that Carrie uses all her strength and telekinetic power to punish an entire tow who have been cruel to her: children, people her age, and adults. Carrie condemns everyone at Chamberlain, the city goes under fire, electrical explosions, desolation, and death.

Carrie will return home and will also bring that violence in front of her momma that has been one of her main punishers and Ms. Whites reveal why she considers sex to be a sin.

The end of the novel is a recount of Chamberlain’s remains after the apocalypse created by Carrietta White and her powerful ally and only friend: telekinesis. In the account of the tragedy, there are testimonies of survivors and even a commission that investigates the case and wants to invalidate what Sue Snell wants to say.

The Bildungsroman tradition is a kind of novel that describes and explores the way the main character develops morally and psychologically. The German word Bildungsroman means “educational novel” or “training”, a type of novel about life experiences and education: Johann Wolfgang von Goethe’s Wilhelm Meister Apprenticeship is a classic example of that genre. It traditionally ends on a positive note, although its action may be tempered by resignation and nostalgia.

Carrie somehow possesses certain elements of the Bildungsroman. She assumes her role in society and makes decisions based only on the moral perspective she knows: revenge. In his psychological awakening, he embraces telekinesis with all the force of his being. Become fully aware that you are a person with telekinetic powers.

I think it is a bit reductionist to minimize King’s work because of the unusual and enormous success of his work both in sales and in the transformation of his books into movies. I wonder what the attitude of those would be who criticize him if only one of his works were taken to the cinema.

Does King have bad novels? Of course, you must have them. This is very likely when you write and publish so prolifically. King himself confirms this; In October 31, 2014, Rolling Stone interview he said: “Tommyknockers is an awful book […] there’s a book in here, underneath all the spurious energy that cocaine provides […] the book is 700 pages long, and I’m thinking, ‘Probably, there’s a good 350-page novel there.’”

King has a legion of followers and apparently detractors as well. I’ve read on many blogs and webpages about how bad King writes. Something very curious happens in literature: many of those who criticize acclaimed writers generally do not have a single successful book and even many of the wannabe intellectuals and moral judges of literature have not published any work whatsoever.

In short, Carrie‘s story is a twist on a Cinderella story (Cinderella gone wrong) because the special night of the teenager Carrieta White ends up being a painful and shameful moment, a brutal Bildungsroman.

I started the article by saying that after reading Mr. Harrigan’s Phone I concluded that King must be one of the authors of Horror who has best portrayed the life of the common man of the middle class and made it extraordinary.

I have had the same feeling reading Carrie and Mr. Harrigan’s Phone, except that the prose in If It Bleeds is much more lyrical and arguably less visceral. You can see the difference, the maturity and long journey from the author of 1974 and the one from 2020.

I conclude this article by saying that in novels Carrie, The Green Mile, or If It Bleeds, we see ordinary people, from suburbs and rural areas, taking on a significance that they do not have in the real world (like many of us) and in that regards, perhaps King is ahead from everybody. I could say that King brings the common character to life with extraordinary elements and this is almost a trademark by the Maine author. In that sense, Stephen King is the king.

Science Fiction to Look for April 2021